40 Under 40: Latinos in American Politics

HuffPost Latino Voices has listed 40 latinos under 40 we should watch this election cycle. Amongst them, is former Puerto Rico Statehood Students Association president Eduardo Soto, who now works with the Raben Group.

Eduardo Soto (The Raben Group): Prior to joining Raben, Eduardo was a legislative assistant to Rep. Maxine Waters (D-CA). He enlisted organizational and member support for original and reintroduced legislation, taking care to address stakeholders’ concerns in order to build formidable coalitions. Eduardo worked on legislation in diverse policy areas such as criminal justice reform, diversity in media, and student access to courts. A bilingual native of San Juan Puerto Rico, Soto has quickly become a top Spanish-language commentator on American political television and radio.

To our knowledge, Soto is the only Puerto Rican included in the list, a problematic sign considering the magnitude of problems Puerto Rico faces, and the amount of help in DC it will need to solve them. Maybe Soto can provide some tips?

Serrano and Velazquez Make Demands of Oversight Board

Cherokee Nation to appoint delegate to US House of Representatives 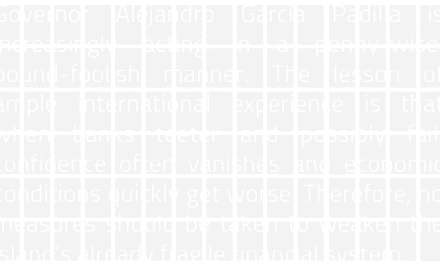