The principle of Judicial Review was introduced by Supreme Court Judge John Marshall in the 1803 case of Marbury v Madison. The Court in this case affirmed its judicial authority to eliminate laws that violate the US Constitution, a treaty or another essential law. The question follows: Does judicial review apply to court decisions that violate human rights guaranteed by the Constitution?

Judge Marshall (1755-1835), arguably the most famous and prestigious among Supreme Court judges, was the fourth justice of that court and served for 34 years. Marbury v Madison, presided by Judge Marshall, was the first case where the court exerted judicial review “en banc” – meaning that the case was heard and resolved in the presence of the entire court, with full judicial authority.

Following 1898, at the end of the Spanish-American War, to the victor belong the spoils and Puerto Rico was given by Spain to the United States as a war booty. Up to this point, territories acquired – or taken – by the US during its western expansion – were destined to one of two options: eventual transition into a state or independence. By then, the two landmark cases that established the existing jurisprudence had been decided.  The first was Loughborough v Blake in 1820 with the ruling by Judge John Marshall that the US Constitution would apply to the entire United States, District of Columbia and territories included.

Thirty-eight years later (1856), the Supreme Court heard the Dred Scott v. Sanford case. Roger R. Taney, Chief Justice at the time, concluded that the government had no power – no constitutional right – to acquire territories with the intent of permanently retaining them as colonies. In essence, both findings upheld the limits of power of the Republic over its territories.

However, near the end of the century, several Harvard University intellectuals came up with the necessary ammunition to persuade the Supreme Court to pronounce itself on the arising questions surrounding the status of the country’s new territories; thus, the Insular Cases were born. The arguments were provided in an article by Abbott Lawrence Lowell titled “The Status of Our New Possessions: A Third View” published in the Harvard Law Review in 1899. The piece made the case for a third option: the non-incorporated territory.   As a result, in the first of the insular cases – Downes v. Bidwell – the court adopted the non-incorporated territory as the option for Puerto Rico. It was also decided that Puerto Rico belonged to but was not a part of the United States, from which the notion follows that Congress exercises plenary powers over the colony of Puerto Rico.  Between 1899 and 1922, a total of 23 decisions regarding the territories were handed down by the court and became known as the Insular Cases, which established public policy for the treatment of colonies acquired at the end of the Spanish-American War.

The decisions handed down by the court in the Insular Cases are in direct violation of two Supreme Court decisions between 1820 and 1856. They violate the doctrine of “stare decisis” that applies to similar matters previously judged and decided. Not surprisingly, I have not encountered anyone with a solid knowledge of the topic that believes the Insular Cases will ever be reviewed with the intention of revoking and modifying the jurisprudence to reflect the present reality. The chances are slim to none.

Ironically, these outrageous decisions have sentenced Puerto Rico to remain a colony of the supposedly most democratic country in the world, a country that honors international treaties espousing the right to self-determination of all nations.  In a previous article I expressed my opinion that judicial dictatorships are harsher and more fearsome than executive dictatorships.  The US Supreme Court, by way of the Insular Cases, placed the Constitution at the service of colonialism, an intolerable affront to any nation.

Furthermore, for all practical purposes, the court paved the way for the US to become an empire along the lines of the infamous European empires, conveniently overlooking the fact that the country had to fight for independence from the British Empire in 1776. Such a stance bears a resemblance to the extensively documented notion depicted in matters of domestic violence as “battered children becoming battering parents.”

The US Constitution follows the flag in all instances except for the colony of Puerto Rico, where it is not applied in full, but rather to the extent determined by Congress. Again, lest anyone forget: in every American embassy around the world an American flag waves and the US Constitution applies to the furthest extent.

I submit that all three branches of the Government of Puerto Rico should and must petition the US Supreme Court, Congress and the President to initiate a judicial review of the Insular Cases for being in open violation of the US Constitution. It is high time for Puerto Rico to be removed from the shameful category of non-incorporated territory. Puerto Rico and the entire world await this act of past due justice.

Pasquines will publish interesting pieces on our core topic: politics. Our guests come from all backgrounds. If you wish to contribute, send an email to opinion@pasquines.us.

As the United States dithers on climate change, the territories remain the most vulnerable

When the colony bites back

Status is still elephant in the room 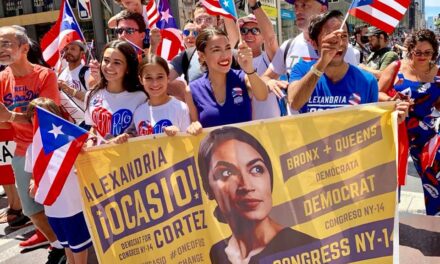