On June 21, Puerto Rican Governor Wanda Vázquez Garced (NPP, R) signed into law a new Electoral Code. There has been a multitude of controversies, over various aspects of the code, and scrutiny and derision of the new law has come from a vast number of opposition parties and humanitarian organizations. While the Governor and her political supporters agree that this bill was important due to its expansion of access to absentee voting, opposition parties have taken issue with online voting provisions, consolidation of power within the electoral system, and the casting of symbolic votes for the United States President and Vice President starting in 2024.

The largest controversy over the code surfaced several months ago, over an online voting provision. The amendment called for a gradual increase in online voting over the next eight years within Puerto Rico by creating and implementing an Internet voting program. However, many civil liberties advocates expressed dismay and alarm at this change, citing the fact that online voting may significantly decrease election security as well as undermining the rights of individuals to vote. Mayte Bayolo, a legislative attorney for the ACLU in Puerto Rico, indicated that “the right to vote isn’t just the right to cast a ballot, but also to have your vote count. Our concern is not only that the voting rights of the Puerto Rican population will run the risk of being tampered with, but also that they won’t necessarily know that their vote counted”. Though this voting reform may have increased access to voting, critics found it hard to reconcile the potential for fraud with this increased access.

Due to this concern, when Vázquez signed the new electoral code, it did not include the planned eight year transition to Internet voting. She stated that it is almost impossible for all parties to agree on complex bills such as these, and that it was her duty to “examine the measure in its entirety”, and upon removal of the online voting provision, she decided to sign this “important” bill into law. Measures were taken to eliminate vice presidents and undersecretaries at the State Electoral Commission (SEC) that will reduce government spending by at least $500,000. Despite the removal of the most controversial voting provision, Vázquez did note that the new code greatly increased access and provisions for absentee and early voting, reforms that were strongly objected to by opposition parties. These new provisions indicate that any voter who cannot be physically present on Election Day “for reasons of work, being a single caregiver, hospitalization, travel, being a candidate, physical handicap, confined, a voter who is bedridden or other reasons, and a voter living in a care center” will be included within the absentee ballot rights.

While Senate President Thomas Rivera Schatz (NPP, R), the author of the bill argued that the opposition to this new code is an attempt on the part of minority opposition to suppress the right to vote, opposition parties have filed different complaints. Senator Eduardo Bhatia (PDP, D), a Popular Democratic Party candidate for governor, has interpreted the bill as a new attempt to facilitate absentee voting for New Progressive Party supporters who have physically left Puerto Rico. The new electoral code is generally backed by the New Progressive Party as a pro-statehood demographic, and opposition appears to share the belief that those who have emigrated from Puerto Rico are pro-statehood, and this bill would allow those voters to have a voice in general elections, as well as on matters of statehood.

The lack of consensus before the bill was passed has been a crucial sticking point for opposition. PDP President Aníbal Jose Torres argued that the Governor has “betrayed” Puerto Rico, as she had originally discussed reaching consensus among parties before the law was signed, but “the governor didn’t keep her word. It was she who publicly expressed that she would not sign a bill that lacked the endorsement of all interested groups”.PDP leaders, the Citizen’s Victory Movement, and the Dignity Project all expressed discontent with the bill and requested that the Governor veto it, indicating more concerns with the overall bill by citing its passage as too close to primary and general elections, as well as the lack of consensus that has been a part of partisan politics for decades.

The bill has been signed into law for a short span of time, so potential ramifications for voters and government have yet to be seen. It is clear that the lack of consensus among the political parties of Puerto Rico in regards to this specific bill will provide some contention in future elections and voting reforms for several years.

US House committees look to LUMA for answers after Hurricane Fiona 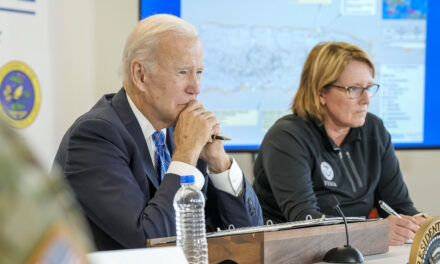 How Biden is responding to Hurricane Fiona