A crucial component of an effective government is the ability to properly forecast costs and revenues. The last decade’s worth of forecasts made by the Puerto Rican government have failed to accurately portray reality, profering a case study on how the inability to fulfill this fundamental role can cause a country to cascade into enormous debt. When the government balloons their debt, it dissolves any remaining confidence that they can back creditors, and outside entities who have a stake in the situation may step in to mitigate some of the financial problems. Paying back creditors and balancing budgets is no easy task; a tall order like this is often accompanied by reductions in government spending (domestic investment and social safety nets), methods to increase government revenues (taxes and interest rates), and focusing cash flows to parties rather than Puerto Ricans (paying back creditors versus investing internally for future sustained growth).

The original budget proposed by the Financial Oversight and Management Board for Puerto RIco  included some components that were unacceptable to Governor Ricardo Rosselló and his administration. Some of the disagreeable terms included a 10% decrease in pension payments to retirees, sick time and vacation time cut in half for public employees, and the elimination of popular Christmas bonuses. The disagreement between sides was so strong that the possibility of another legal battle was looming on the horizon for the Puerto Rican government if it did not comply. In a last-ditch effort between Rosselló and the Oversight Board, a meeting was held on Sunday, May 20, to hopefully reach a compromise before the situation could become more complicated.

Rosselló has already promised the people of Puerto Rico that he will not implement the 10% cut on pensions; his blatant defiance of the Oversight Board’s request is what sparked concern over another court case. However, when Rosselló met with the board on Sunday, his requests were not limited to pensions and the prospect of potential litigation did not stop him from propositioning for more.

A cut in pensions for retired public workers was not a negotiable option for Rosselló. During the meeting he was able to successfully convince the board to budget for the original salary amount and keep pensions intact. It was agreed upon that public workers would not lose any vacation or sick time, and Christmas bonuses would continue to bring holiday cheer. Even better news exists for some public workers as Rosselló negotiated a $1,500 raise for teachers and police. Rosselló and the board also came to terms on a $25 million appropriation within the budget that will be used to fund scholarships for students attending the University of Puerto Rico. A 4.5% decrease in taxes on processed foods was mutually agreed to as well, effectively giving added worth to money spent on groceries. As with most deals however, there is a catch, and this deal is not unique in such manner.

In the words of Rosselló: “All plans and agreements have their strengths and weaknesses.” The strengths in this case are obvious: Rosselló can keep his promises to public workers and assure his constituents that he is able to competently hedge them from some of the austerity measures proposed by the board. Regarding weaknesses, the first point to be made is that Rosselló’s administration must keep the country running with 22% less funds than the previous administration was allotted. Secondly, Rosselló had to tentatively agree to transition Puerto Rico—in regard to employee rights—from a “just-cause” to an “at-will” state.

If it was up to Rosselló, the agreement would not be tentative, but he believes this concession is worth the gains made during negotiations. However, that decision cannot be made solely by Rosselló because the state legislature must be involved as well. Act 80, also referred to as Puerto Rico’s Unjustified Dismissal Act, is the current law on the books in reference to employee rights regarding termination. This law dictates that employers must have a just-cause for firing an employee. If Rossello wants to keep up his end of the bargain, he must convince the Puerto Rican state legislature to repeal Act 80, or risk losing the leverage that he levied during negotiations with the board.

Rosselló must now go from one meeting to another, and while he asked for compromise in the first meeting, he will make a plea for change in the second. During his presentation to the state legislature, Rosselló could not only boast of the prizes he has in store, but he had to also humbly request the legislature to back him up on a decision to barter an important commodity: workers’ rights. As Rosselló and the board make progress, the lens shifts its focus from detrimental deadlock to the political playground; the ball was now in the legislature’s court. 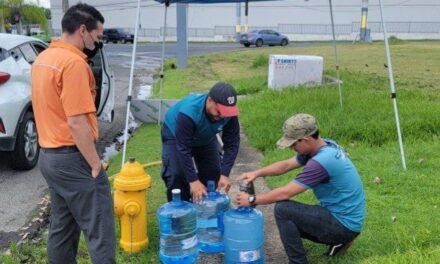 Puerto Rico and US Virgin Islands struck by Hurricane Fiona