Pedro Pierluisi managed to turn out more supporters for the 2016 Elections Puerto Rico March-April Poll, easily defeating opponent Ricardo Rossello. That said turnout from New Progressive Party affiliates was comparatively low, in comparison to Popular Democratic Party supporters, which indicates the results are likely not as accurate as we would have hoped for. Only NPP affiliates were asked the question of which gubernatorial NPP candidate they would choose in the primary, and 166 respondents answered. The margin of error for this question assuming a random sample (which we know we did not get), would be of 7.60%, above normal polling standards. 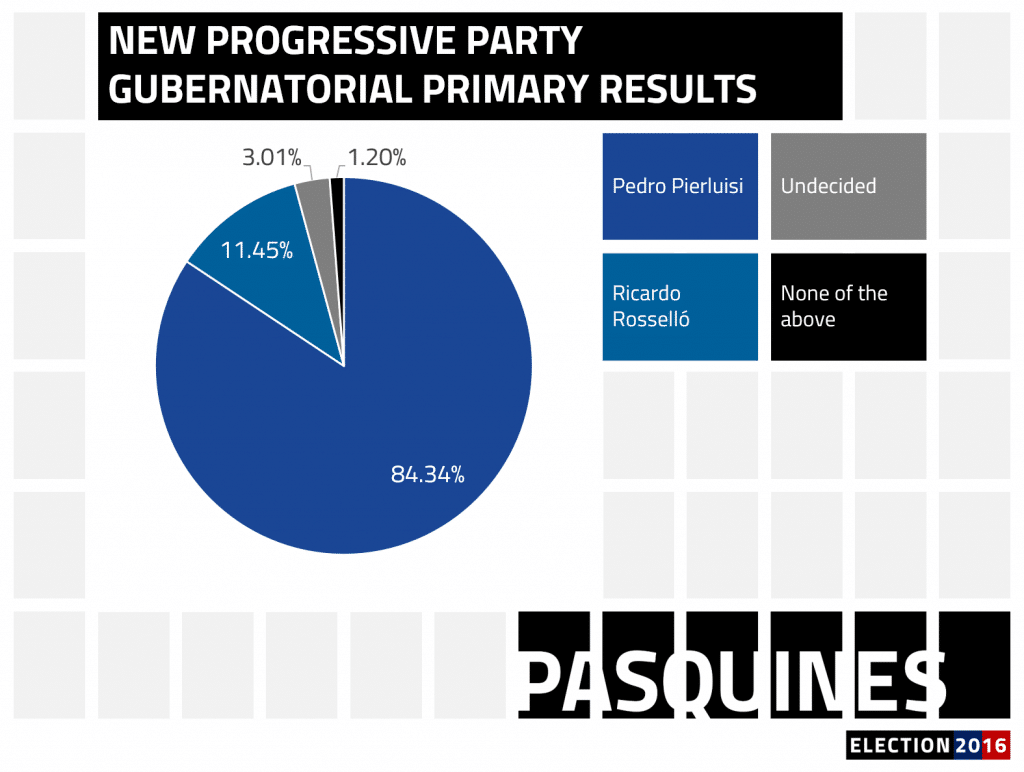 With 140 to Rossello’s 19 votes, Pierluisi dominated the poll. This merely shows that Pierluisi’s supporters and campaign might be paying more attention to polls than Rossello’s are. We tried correcting the results adjusting for established demographic data in Puerto Rico, but the results ended in the same way, with Pierluisi having a huge lead over Rossello.

Despite this, we can take a closer look at the data, examining then the makeup of each candidate’s supporters.

In the poll we registered an oversampling of men versus women. Correcting for this did not affect the end result of the poll, hence we left the results unaltered.

Interestingly, Pedro Pierluisi’s support broken down by age yields an almost perfect bell curve, which tends to indicate a good proportional representation. This could also indicate that support for each candidate may not be predicted by age group, but with a small sample like this one, certain conclusions cannot be drawn.

Looking at each candidate’s support from a geographical perspective, as with the poll at large, we reflected larger participation volume from high population municipalities like San Juan, Guaynabo and Bayamón.

An interesting finding from the poll was how support shifted in the other races, namely the resident commissioner race, depending on who prevails in the NPP primary. From our data, it seems as if Pedro Pierluisi supporters are not entirely sold with Jennifer Gonzalez, with a significant portion indicating they preferred none of the candidates if Gonzalez wins the primary.

With our limited data set, it is difficult to determine if the inverse is happening with Ricardo Rossello supporters:

Lastly, considering whether the primary will have a damaging effect, Pierluisi can be at ease, most of Rossello’s supporters said they would back him if he prevails in the primary:

That said, Ricardo Rossello has cause for concern. A majority of Pierluisi’s supporters, when faced with the idea of Rossello as the NPP candidate in the general election, said they would either vote for another candidate, or that they would not vote at all.

If the animosity of the primary election spills over on to the general election, it could spell trouble for the New Progressive Party, who lost the 2012 election because of high abstention rates among its supporters. However, historically the NPP has been able to smooth over its internal scars from primaries, to come out strong in the general election. With a tremendously unpopular Popular Democratic Party incumbent, and an economy in disarray, our overall poll results notwithstanding, you can expect either one of the two NPP candidates to prevail in the general election come November. Until then we have one more poll scheduled before the primary. Hopefully we will have more accurate data on that instance. For now, Pierluisi can claim victory on this March-April installment of the 2016 Elections Puerto Rico Poll.