Lacking full representation, residents of US territories prepare to vote in 2018

They may not be sending voting representatives to Congress, or be able to vote for president, but thousands of residents in most United States territories are gearing up to go to the polls in November. Though the territories may have different electoral systems and levels of self-governance, nearly all will have elections on November 6, in just under a month.

Stacey Plaskett (D) is running unopposed to continue serving as the non-voting territorial delegate to the US House of Representatives for the United States Virgin Islands, but the governor’s race is far from uncontested.

Seven candidates will face off on November 6 to be the US Virgin Island’s next governor. Six of the candidates are running as Independents, including incumbent governor Kenneth Mapp (I).

Mapp (I), who was first elected in 2014 after two unsuccessful bids for USVI governor, is the 8th governor in USVI history. He ran on a promise to create 1,000 government jobs, reinvigorate economic growth, and reduce the islands’ rising energy costs, which are often several times the average on the mainland. He won his first term in a landslide.

But the closure of an oil refinery (the territory’s largest employer) and the aftermath of Hurricanes Irma and Maria severely impacted the territory’s ability to recover economically, and the territory’s public debt soared to nearly $2 billion, with almost a third deriving from the operating cost of the government. In August of 2017, Governor Mapp cut off communications with credit rating agencies, resulting junk rating of Caa3 from Moody’s, a top US rating firm.

Among the candidates is Albert J. Bryan, Jr. the former island labor commissioner, running as a Democrat with the backing of the US Virgin Islands Democratic Party, with fellow senator Tregenza Roach as his running mate. A key plank of the Bryan/Roach campaign involves a plan to promise free college tuition to graduates of USVI high schools, if they maintain a 3.0 GPA. The candidate’s platform claims that the tuition will be paid for by a $3 million cut to the Bureau of Corrections. The plan is similar to the governor’s proposal to fund tuition using funds from an excise tax on rum manufacturers.

Gubernatorial candidate and former island Attorney General Soraya Diase Coffelt (I) running on a platform she calls “business-friendly,” disagrees about the viability of the proposals by Mapp and Bryan.

“The focus should be on generating revenues to pay down existing debts and stop the waste, misuse and abuse of public funds,” writes Coffelt.”Furthermore, immediate attention needs to be given to improving our healthcare system, roads, GERS, and WAPA for example,” she added. “The government does not have the money!”

Also running for governor are teams led by economist and hedge fund manager Warren Mosler (I), who was previously a candidate for US senate in Connecticut in 2010 and lieutenant governor of the US Virgin Islands in 2015, former 7-term senator in the US Virgin Islands legislature Adlah A. “Foncie” Donastorg, healthcare executive Moleto A. Smith, Jr., and territory Senator Janette Millin Young.

No candidates endorsed by the US Virgin Islands Republican party will appear on the ballot.

Also up to the voters of the US Virgin Islands to decide is a petition to restructure representation in the islands’ Senate, approved just before the October deadline. The territory’s legislature is currently unicameral with 7 senators elected from each of two constituencies, with one senator elected from St. John, at-large, for a total of 15 senators. The petition would divide representation in the territory into four districts with 2 senators each, a district of St. John with 1 senator, and 6 at-large senators elected by the entire territory.

Proponents of the petition claim it will lead to better representation for US Virgin Islanders. If approved by voters, the US Virgin Islands code will be immediately amended and will be immune from both a veto from the governor and from repeal by the legislature for a three year period, unless overturned by a two-thirds majority.

The last day for new voter registration in the US Virgin Islands was Sunday, October 7.

Incumbent two-term governor Eddie Baza Calvo (R) is barred from re-election, as governors are limited to two consecutive terms by the Elective Governor Acts of 1968. Running to replace him is Lieutenant Governor Ray Tenorio (R), a former police officer, and Lourdes Aflague Leon Guerrero (D), a former nurse who is the Chairwoman of the Board, Chief Executive Officer and President of the Bank of Guam and BankGuam Holding Company.

The two party-endorsed candidate may also be challenged by a write-in campaign from Democrats Senator Frank Aguon, Jr., and Alicia Limtiaco, endorsed by Guamanians for Fair Government. The campaign may be stymied by a ballot design, which the group claims does not provide adequate space for write-ins.

Territorial Delegate Madeleine Z. Bordallo (D) lost the Democratic primary in August after 8 terms to 37-year-old Michael San Nicolas, a senator in the Guam Legislature. Bordallo’s political future was in question after the Board of the Office of Congressional Ethics revealed that she may have profited from the Japanese government as a landlord.

San Nicolas will face Republican nominee Doris Flores Brooks, who resigned her 18-year tenure as Guam’s first and only Public Auditor. Brooks has made it a priority to secure federal funding for war reparations for Guam residents who survived WWII.

“We were the victims, we were the ones hurt,” said Brooks at an October 1st press conference. “It’s a matter of retelling the story of that and reaching out across the aisle,” she added. Brooks plans to secure a deal that would allow Guamanians to be reimbursed by earned income tax credits

San Nicolas criticized Brook’s plan on Facebook, saying that “the approach to address it similar to the Additional Child Tax Credit is something that I too have raised multiple times as a possible avenue but we shouldn’t put all our eggs into one basket – especially a basket that has been sitting there to do something with for over a decade that went nowhere.” San Nicolas argued for a different approach, referencing Bodallo’s inability to solve the issue.

“Yes, I know she tried, but you’ve got to continue to try and try again until we do get it. I will not give up until we do get war reparations paid by the federal government,” responded Brooks to the criticism.

Incumbent Amata Radewagen (R) is running to continue serving as a nonvoting delegate to the US House of Representatives from American Samoa’s At-Large Congressional District, to represent the interests of nearly 56 thousand US Nationals living in the territory. She is challenged by businesswoman Meleagi Suitonu Chapman (D) and former gubernatorial candidate Tuika Tuika (I).

However, the senators of the American Samoa Senate are voted on strictly by a select group of tribal chiefs across the islands. The Legislature of American Samoa in Fagatogo, or Fono, is unlike any other in the United States, being both bicameral and nonpartisan, and having selective enfranchisement for voting in the senate. 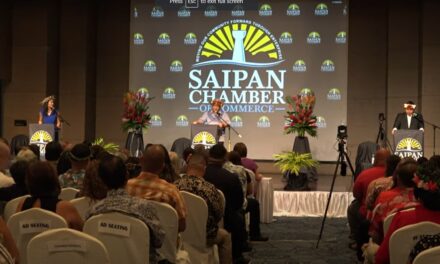