Guamanian politics don’t follow the same party lines as mainland America’s two major parties, despite those two parties being the dominant political parties on the island. The Guam Legislature currently has 10 Democrat members and 5 Republican members, but their priorities differ from those of the same party in mainland America. The Guam Legislature is a unicameral body and Senators are elected at-large through an open partisan primary and a subsequent island-wide election.

With a population less than 200,000 and distance from mainland America of about 7,000 miles, Guam faces different challenges and has a different political overview than that of ordinary national discourse.

The Republican Party came to Guam in 1966, finding its roots in the party previously known as the Territorial Party which had formed in the late 1950s. Like in Mainland America, the platform  of the Republican Party of Guam is based on social and fiscal conservatism.

Although the ideological slants appear very similar, observers say that Guam has a personality more than a values-based party affiliation. Jesse Lujan, a former Democratic senatorial candidate who was later elected as a Republican senator, said that politics are “Guam’s favorite pastime, favorite sports basically.”

According to former Democratic Party of Guam State Chairman Joaquin Perez, the dominance of the Church and religion is evident on issues such as abortion and gambling. Perez also said that “on issues such as political status, the prevailing economic conditions shape the thoughts and responses of political leaders and the citizen.” Republican Party of Guam State Chairman Jerry Crisostomo said “voters may tend not to always vote based on party affiliation but rather on the individual person seeking elective office.”

Additionally, the issues Guam faces are markedly different from those which appear in national politics.

For example, compensating war survivors with reparations for their fate during the Japanese occupation of Guam is a top priority for some, such as Guam’s former delegate to the U.S. House of Representatives Madeleine Bordallo, a Democrat. Last year’s Republican candidate for delegate, Doris Flores Brooks, agreed the reparations are good, but was disappointed that funding for the reparations is coming from an increased tax on Guamanians rather than the federal government. Michael San Nicolas, a Democrat and the current delegate to the U.S. Congress for Guam, criticized Brooks for putting all eggs in one basket, seeking federal funds as the only source for reparations. 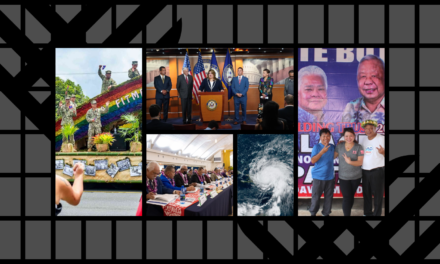 Unleashing the context of islands