For the past few weeks in both the United States House of Representatives and Senate there has been a significant amount of talk in providing further monetary aid to states and territories due to the Coronavirus. As of now there are two known bills going around in Congress.

The first of these two bills was introduced on April 19 by Senator Bill Cassidy (R) of Louisiana and Bob Menendez (D) of New Jersey. This bipartisan bill is known as the State and Municipal Aid for Recovery and Transition (SMART) Fund and builds onto the existing Coronavirus Aid, Relief, and Economic Security (CARES) Act. This bill aims to expand the eligibility of funding to include counties and towns with populations greater than 50,000, instead of the current threshold of 500,000. This change in eligibility ensures that more entities can receive additional funding, and increases the flexibility for state and local governments to use the funds in helping their economy regain revenue lost. The bill is set to provide $500 billion as further monetary relief to states, territories, and local governments. This bill has specifically gained support from the National Governors Association (NGA), which has called for $500 billion to account for budget shortfalls. The SMART fund will ensure to provide funding to state and local government and territories, in three equal tranches using a formula. The three equal tranches are as followed:

“1) One-third to eligible entities based on population size to ensure they each receive additional federal resources to meet their growing needs (Same formula used to disburse the $150 billion state stabilization fund created in the CARES Act, but essentially doubles those available funds)

2) One-third to eligible entities based upon the number of COVID-19 cases relative to the U.S. population to target the urgent public health challenge

The second of these two bills were introduced in the House on April 21 by Representative Ed Perlmutter (D) from the 7th district of Colorado. The bill, Coronavirus Relief Bill (HR 6592), has up to date gained support from 33 House democrats. The bill has been referred to the House review and oversight committee for further critique before any other actions are taken. The bill’s emphasis is to provide monetary relief caused by the Coronavirus to all states and territories, as well as Native American Tribes. The bill states that the Secretary of Treasury will have to pay each state, territory, and tribal government a specified amount, which is proportional to the population for the 2020 fiscal year within 30 days. The funds given to each state, territory, and tribal government can be used to cover expenditures in the public health field, replenish any revenue lost, and help recover the economy.

As Congress begins its second week back after their recess due to Coronavirus, there is hope that sometime during this month of May, an agreement will be made in both the House and Senate of what a second relief bill will entail. This future bill will most likely entail some sort of aid for state and local governments, which includes territories and Native American tribal nations. However, a bill with these sets of goals will only be accomplished through bipartisanship.

Simon Gardehl is currently a senior at Roanoke College in Virginia. There, Simon studies international relations with a particular interest in applying theories to international relations. Simon hopes to continue his learning after Roanoke at graduate school. He anticipates to further evaluate and write about how decisions in the political economy field can be explained through certain theories. Simon is a former Economic Affairs Intern Correspondent at Pasquines. 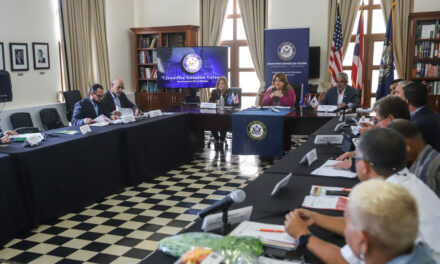