With the 2022 Guam Election approaching in August, Guam election organizations are looking to encourage voter registration for senatorial, congressional, and gubernatorial candidates. Within the past week, two political committees, Action PAC and Responsible Guam Political Action Committee were revitalized for the August election. Both are registered with the Guam Election Commission.

Action PAC acts at the “grassroots level” to “play an active role in the government.” They formed in 2020 when local groups joined together to improve the state of Guam politics. Action PAC has five key focuses: “rollback of the business privilege tax from its current 4% to 5%, advocacy for government efficiency to protect and preserve resources, to improve the transparency in all levels of the Government of Guam, and promote open communication and collaboration between the public and private sectors, to strengthen relations with the US military to improve safety and security in the region and maximize economic opportunities for Guam, and to support for a part-time legislature.” Last week, Phil Leddy II, director of sales, marketing, and business development at Guam Copier was announced as the new executive director for the 2022 election, to replace the previous executive director of the 2020 election, Laura Dacany. There is a lot of hope in the new role that Leddy II will rekindle these five pillars of APAC as well as bring new insight to the committee. “It’s time to join together to make the changes we need to see in our government.”

The Responsible Guam PAC, a non-partisan political action committee, was also formed for the August election. Their goals differ slightly from those of Action PAC. Their aim is to verify the information presented by potential candidates. They do not endorse candidates but rather look to give the people of Guam a fact check on its potential leaders and to provide the truth to Guam citizens.

APAC and the Responsible Guam Political Action Committee are not the only committees starting up for the August 2022 election. The co-chairman of the Republican National Committee, Tommy Hicks Jr will be visiting Guam this week to meet with officials, candidates, and committee leaders. In a statement released by the Republican Party of Guam, they say Hicks “will be discussing ways the national committee can provide some additional support” to the election. It is clear to Guam residents, Chamorros, that this upcoming election is integral not only to their personal lives but also to the future of the island.

Marisa Bello is a junior in high school from Washington, DC. She is hoping to pursue a major in international politics in the future. Marisa is very passionate about learning new languages and cultures. She recently participated in a State Department language exchange program where she was able to explore the Arabic language. Currently, she runs a club at her school that focuses on combating period poverty by providing free menstrual products to women around DC. Marisa enjoys running, spending time outside and with her friends and family, and reading. She is a former Political Affairs Intern Correspondent at Pasquines. 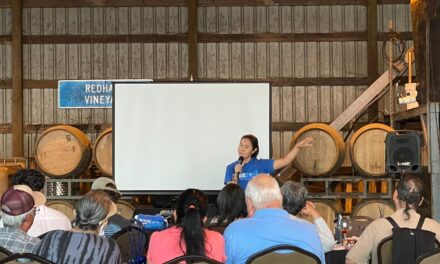