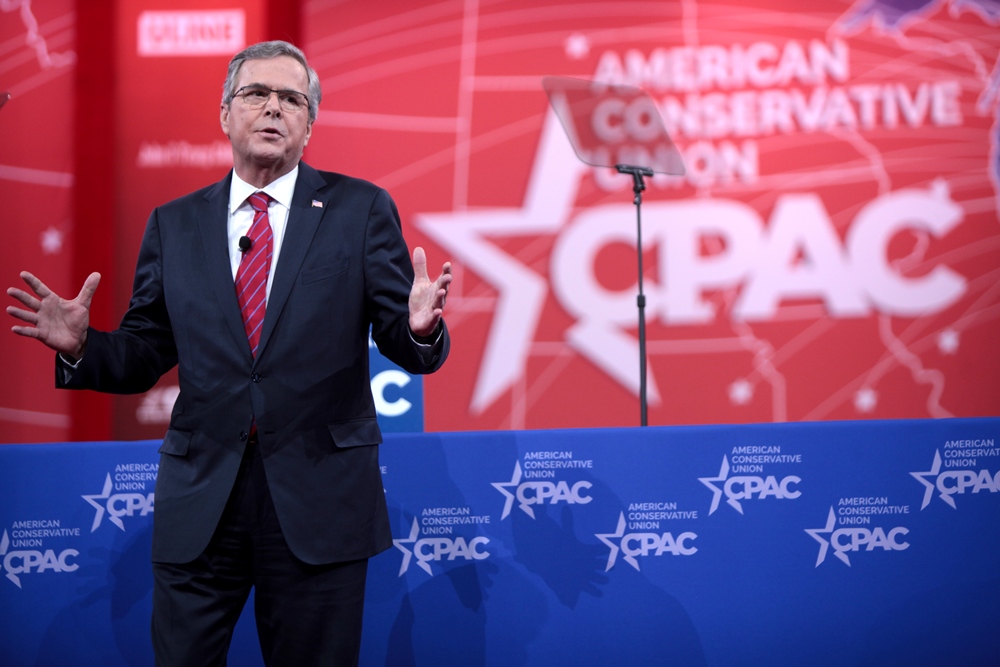 In the past few months newly minted presidential candidate Jeb Bush, next in line to the Bush presidential dynasty, has been touring Latino communities in key swing states around the U.S. Most notably in Florida, where he held events targeted at the highly influential bloc of Cuban-American voters.  And if you remember, back in April he also made an appearance in Puerto Rico, and seems to have placed the territory at the center of his attempt to reconnect the Republican Party to the Hispanic vote, and gain the respect of Latino communities.

Many presidential candidates in the past have also made sure to schedule visits to Puerto Rico. At first glance it may seem strange to some onlookers to see candidates targeting Puerto Rico. The islands’ citizens, after all, have no vote in the presidential election and number only about 3.5 million. Although it can’t vote in the general election, Puerto Rico can vote in the primaries and in 2012 made a significant impact in securing Mitt Romney’s nomination as the Republican candidate. 4.9 million Puerto Ricans also live in the mainland U.S and although the majority aren’t situated in key states, the 640,000 Puerto Ricans living in Florida are a key group for candidates serious about winning Florida, as Romney found out in 2012.  Bush’s main motivation, and likely that of every candidate who will make stops in Puerto Rico this election season, is to convince Puerto Ricans in Florida to vote for them. Maybe that’s why Bush felt he needed to not so subtly keep reminding the audience that he’ll also be campaigning in Florida? Given that the Republicans lost Florida in 2012, getting a larger share of Florida’s hispanic vote and winning back Latino voters across the U.S from the Democrats is a key element of the overall Republican Party strategy.

While holding town hall meetings in Bayamon and San Juan, Bush told the people that he thinks Hispanic voters, “are more willing to hear another message” from the Republicans after spending time under Obama’s leadership and that, “we [Republicans] have to campaign in communities to gain their respect and to listen.” While making his usual campaign remarks about increasing economic growth, Bush made sure to show off his Spanish and remind everyone that his wife is Mexican and also, that he knows, “the power of the immigrant experience.” To be fair, Jeb Bush has some genuine roots in Spanish speaking communities, but he and the rest of the Republican candidates have a steep hill to climb as Latino support for Romney in 2012 was only 27%. Even if Jeb convinces many Puerto Ricans on the island to call their friends and relatives to tell them to vote Bush the Republican party, including Jeb, must convince Latino voters that they will be more accommodating and reasonable towards undocumented immigrants.  However, instead of doing this the party has continued to push away Latino voters on this issue since the last election, with immigration bills last year that included defunding the Deferred Action for Childhood Arrivals Act, which allowed certain undocumented immigrants under 16 to earn two year work permits and exemption from deportation.  Trying to defund DACA and other efforts might have helped some Republican congressman on the border make friends with the ‘armed patriots’ of border patrol groups like the Citizen Defenders but mostly it has just pushed Latino voters away from the Republican party. As a gateway issue for most Latino voters, Republican candidates’ stance on immigration policy will likely determine if Latino voters consider voting Republican.

Still, Jeb Bush has been one of the first candidates to clearly state his support for Puerto Rican statehood and with Florida being vitally important to each and every presidential campaign he will likely be the first of a growing line of candidates that want to make sure Puerto Ricans know that they too believe Puerto Rico should have the opportunity for self-determination. Maybe one of these candidates will actually follow through with this campaign promise and devote genuine energy towards Puerto Rico’s status issue and allow the people living in the islands to cast a vote that really matters. Until then, everyone living in Puerto Rico can have the conciliation that some of their friends and relatives in Florida might help decide the election.