Officials Struggle to Estimate the Extent of Puerto Rico Exodus

‘We Made It Up’: Trying in Vain to Count the Puerto Rico Exodus | Bloomberg https://t.co/NTv8eEXLRX

An accurate depiction of Puerto Rico’s population “underpins everything” from how much electricity needs to be generated and how many teachers are needed, to how much of the territory’s $74 billion debt is repaid. Investors seek solid numbers in reference to the population of the islands as government officials and academics theorize the magnitude of the exodus post-Maria.

An announcement made by Puerto Rico’s Resident Commissioner, Jennifer Gonzalez-Colón, on January 10 confirmed the formation of a “shadow delegation” that will lobby the US Congress for the chance for Puerto Rico to vote “in binding referendum” for either independence or statehood. The congressional delegation consists of 2 shadow Senators and 5 shadow Representatives, mirroring what representation for Puerto Rico would look like were it a state. This strategy has worked for previous statehood campaigns including that of Tennessee, Michigan, Oklahoma, and California. Puerto Rico has voted in favor of statehood in the last two, non-binding, referendums; Governor Ricardo Rossellò put together the shadow delegation and claims the time for statehood is now, more than ever.

Thank you. You made the right choice to stay in Puerto Rico, where help is desperately needed. Now Congress needs to act. #Power4PuertoRico https://t.co/uBytVkwbRG

Despite reports that food and water supplied by FEMA to Puerto Rican citizens, FEMA has confirmed that it plans to continue to help the recovery effort. As stores and markets continue to rebuild, FEMA will provide aid to needy towns and cities for the “foreseeable future.”

‘Why can’t I have my life back?’: In Puerto Rico, living and learning in the dark https://t.co/jEVJcRrYoS

Puerto Rico’s education department has closed the doors of 21 schools since Hurricane Maria. Nearly a third of the 1100 that remain open are still without power. Teachers are few in number and many are paying out of pocket for their students’ supplies as the islands slowly recover.

Lately, 50 community organizations from the Miami-Dade area have gathered outside of multiple government offices to petition government officials to do more to help Puerto Rico. The gatherings are based on “areyto”, a tradition in Puerto Rico and other Latin-American countries during which pueblos come together as a show of unity and togetherness. Some of the organizations involved in the #Power4PuertoRico movement are Puerto Rican Leadership Council of South Florida, New Florida Majority, and the Florida Immigration Coalition. The office of Sen. Bill Nelson in Orlando, FL was the first to be occupied on January 22. Since then, the areytos have targeted the office of Sen. Marco Rubio in Doral, FL, and the offices of leaders in Washington D.C., like Sen. Bob Menendez. The organizers hope to secure more supplies for the islands, as well as discuss the future of the islands economy and schools.

A sophomore at Edinboro University of Pennsylvania, Zeila is pursuing a major in Journalism as well as two minors: Political Science and Psychology. With four years of reporting experience and a proficient fluency in the Spanish language, Zeila's goals with Pasquines are to expand her knowledge of social media marketing strategies, network with experienced writers, and get a closer look at world of online journalism. Zeila is a former Social Media Assistant Editor at Pasquines. 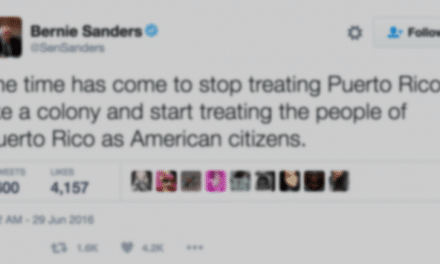