Kenneth Cabán Gonzalez, a United States citizen born and raised in Puerto Rico, can finally transfer his Puerto Rican driver’s license to Georgia without having to undergo exams not required of US citizens born on the mainland. As a result of the lawsuit—filed on behalf of Mr. Cabán Gonzalez and other similarly situated Puerto Ricans residing in Georgia—the Georgia Department of Driver Services (DDS) has introduced a series of reforms that will allow Puerto Ricans in Georgia to transfer their driver’s licenses. DDS will also cease administering a so-called “Puerto Rico Interview Guide” which tested US citizens born in Puerto Rico on various statistics and facts to prove themselves Puerto Rican.

Cabán Gonzalez’ case was one of several instances of Puerto Ricans facing additional scrutiny or being denied services due to their origin.

In October 2017, when Mr. Cabán Gonzalez visited the Georgia DDS office in Hinesville to obtain a Georgia driver’s license, DDS officials withheld his driver’s license, social security card, and birth certificate and initiated an investigation against him for allegedly submitting false identity documents. Days later, DDS officials arrested Mr. Cabán Gonzalez, held him in jail for three days and charged him with fraud and forgery felonies which remained pending until March 2019, when the charges were finally dropped. During that time, DDS learned that the procedures it used to determine the authenticity of Mr. Cabán Gonzalez’s documents were outdated, and the US Department of Homeland Security’s lab analysis verified that Mr. Cabán Gonzalez’s identity documents were genuine. Despite these developments, DDS did not return his license, birth certificate, or social security card, nor was he issued a Georgia driver’s license. DDS emails later revealed that several individuals, including high ranking officials, knew for months that Mr. Cabán Gonzalez’s identity documents had been authenticated, yet they failed to act on the information. DDS later fired or demoted those officials.

Today’s legal victory is the result of class action litigation filed by LatinoJustice PRLDEF and the Southern Center for Human Rights. The reforms being enacted will finally afford Puerto Ricans the same privileges as other US Citizens in Georgia: the ability to obtain a driver’s license, to drive to work, vote, and carry out countless other necessary tasks, while also ensuring their constitutional rights are no longer being violated.

“I am excited that I can finally transfer my driver’s license from Puerto Rico to Georgia. I am forever thankful to my family for supporting me and helping me get to and from work while I was waiting for a decision in this case. I am eager to complete this chapter in my life and be able to give back to the family who has given me so much,” Kenneth Cabán Gonzalez, the plaintiff in Cabán Gonzalez v. Moore, et al.

“With the economic and environmental crisis in Puerto Rico, countless Puerto Ricans have been forced to relocate to the mainland seeking work to support their families. Driving is a vital component of life in Georgia and as a result of our client’s bravery in seeking equal treatment for himself and fellow Puerto Ricans residing in Georgia, we have been able to take a significant step in equalizing the experience of Puerto Ricans to that of their fellow mainland-born, US Citizens,” Kira Romero-Craft, Managing Attorney of LatinoJustice PRLDEF’s Southeast Office. 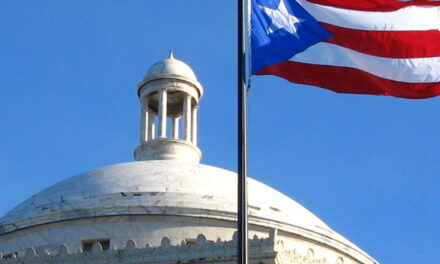